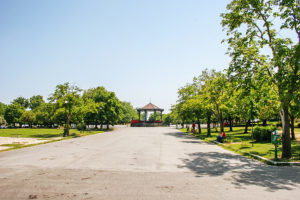 Spianada or the Esplanade, Corfu’s main square, is the largest square in the Balkans. Divided into the Lower Square and the Upper Square (Kato Plateia and Ano Plateia as locals call it), it stretches from the grandiose Palace of St. Michael and St. George (housing the Asian Art Museum) at one end, towards the strikingly positioned statue of Ioannis Kapodistrias- independent Greece’s first Prime Minister-beyond the other end. Kapodistrian’s gaze falls upon the Venetian Old Fortress, bordering the Esplanade to its east side, behind which can be seen the Ionian Sea.

The large Upper Square resembles a park, with its open grassy areas, benches, flowerbeds and trees.  At the centre there is a bandstand, the area around which is used to host various events during the year, including the celebration of the Resurrection at midnight on Easter Saturday. Next to this stands the Rotunda, built using 20 columns in the classical Ionic style in 1816 and is referred to by locals as “sterna”, since it covers the site of a water cistern previously used for drinking water.Also to be found here is the Enosis Monument, celebrating the union (enosis) of the Ionian Islands with the rest of Greece in 1864.

The Lower Square consists of a cricket pitch (legacy of British rule on the island), and the renowned Liston – the French designed arcade, based on the Rue de Rivoli in Paris, housing numerous cafés and restaurants. The wide pavement running in front of the Liston is- and has been for generations- a favourite spot for a promenade (lista – perhaps the origin of the name – means wide walking place in Venetian dialect). It is also where many of the island’s traditional processions take place, so while drinking your coffee you may be treated to the sight of a Corfiot marching band, a cricket match or simply locals taking their afternoon volta